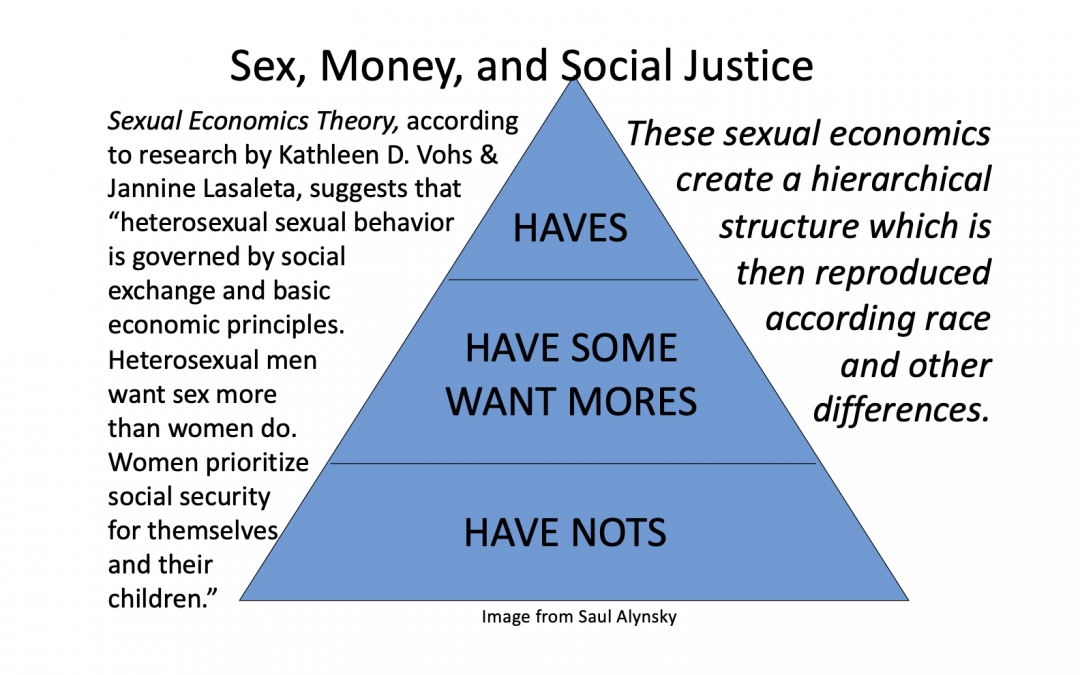 I grew up with a lot of unknown and unacknowledged privilege. I was a straight boy: cis-gender, able-bodied, Christian, middle-class, and white. From these “locations,” I learned lots of specific, mostly unspoken rules. I was taught that these rules offered the only path to a meaningful life. Specifically, it meant there was a social and economic pyramid and the idea was to climb as high as possible before you die. Even as income inequality in the United States became evident to me, I cared very little about this or other issues of social justice. The truth is I didn’t care about money or social status for its own sake. I cared only about girls. I learned that if I wanted a relationship with a girl (and I did more than life itself), my job was clear: stay in school, get a job, buy a car, take her out to dinner, buy her flowers, etc. Generally, I’d need to demonstrate my ability to fulfill societal and economic expectations to “provide and protect.” These qualities were the only thing that made me desirable.

The rules came from all around me: t.v., friends, culture, my church, school, and parents. I probably made some up myself once I had the idea! As an adult, the rules became ingrained and habituated and I stepped right into line. I pursued a career that would allow me to climb some vague “ladder of success.” Like a salmon swimming upstream, I may not have known why, but I knew the necessary direction.

What became increasingly confusing was the information I got from many women about sexism and patriarchy. Because my desire for relationships with women was so strong and visceral, I was very interested in listening to women and understanding their perspectives. At the same time, I was learning hierarchy in “man-school.” The more I could portray myself as an “alpha” male, the more likely I was to separate myself from the rest and appear strong, confident, and bound for “success.” I didn’t have to actually be these things, just look like it. Having this hierarchical frame and desiring relationships with girls so powerfully led me to one conclusion: females had complete power over me.

Of course, I needed to hide this fact because there would be no greater shame, nothing less attractive or sexy in my hierarchical male world than to be dominated by another…especially a girl. I began to realize that I was not the only straight, cisgender boy having this experience. Researchers have found that males, in general and across cultures, tend to interact and think in hierarchical ways (Heim, 2013). In the straight, male world then, it can be common to have an experience of both being dominated by women and suppressing or hiding this fact. For a young male to admit this would be tantamount to giving all his power away and, thereby, losing all hope of climbing the social ladder and successfully connecting with women.

As I became compelled by the need to keep this secret hidden, I invested in my image versus the truth in an attempt to garner the attention of, and matter to, members of the opposite sex. My interest focused on finding value in doing rather than deserving this value by simply being. This incongruence between my external image and how I felt meant that I spent much of my younger life experiencing myself as an imposter. Clearly, I didn’t matter much because I didn’t make a lot of money and wasn’t high on that pyramid of success.

As a young, straight male, I was so desperate to perfect this guise of mattering and importance to connect to women that I felt willing to do whatever it took.  I did anything, from working to build abdominal muscles, buying certain clothes, or getting a particular haircut to ultimately abandoning internal approval in exchange for external approval. While I began to recognize this in my own life, I also realized there has been a historical, gendered, and desperate legacy for many men and societies. In “A People’s History of the United States,” Howard Zinn details much of the history of the dynamics of those in power related to class, gender, race, culture, sexual orientation, etc. This provided many of the ugly, tragic, missing stories about our country’s history (or “herstory”) that most of us did not learn in school. These are stories about events like the Tulsa Massacre of 1921, in which a white mob looted and destroyed an affluent black community, and about the fact that in the early colonies, which were made up of almost all white men, “…women were imported as sex slaves, child bearers, and companions” (Zinn, 1980).

The more I learned about the power dynamics in which white men maintained their power at any cost, the more one question arose repeatedly: “Why?” Why have these power dynamics existed for so long and why do they continue today? How might they be reflected in my own life? How do I participate and perpetuate them?

I have found the historical answers to these questions connected within my own body and experience. As an example, as a white man, I have felt drawn to consider what I would have done if I had lived 150 years ago in the United States. Depending on where I lived (I grew up in Colorado), there may have been pressure, opportunity, and encouragement for me to participate, at some level, in the annihilation of indigenous people. If it meant I could acquire land and social standing and there-by gain access to relationships with women, what would I have done?

Currently, I live in Virginia. I am compelled to wonder: what financial and status benefits would I have gained if I had participated in the enslavement of African people? How would that have related to my ability to have and maintain relationships with women? What would I have chosen?

As I consider these questions, it has been a natural progression to wonder how these issues play out today in my life, my community, and my world. Because slavery is now outlawed, I may be tempted to pretend that issues of white supremacy and social justice are increasingly irrelevant. Yet the loss of voting rights for large numbers of incarcerated Black men has replaced the need for Jim Crow laws in our modern era. How does this benefit me as a straight, white man? While I may not have personally participated in the annihilation of indigenous people, how have I benefited from my ancestor’s actions?

As my awareness has grown, I have been hard on myself at times and become mired in guilt. I’ve blamed others and sought to get them to “get it” and “be sensitive,” like me. And yet, my deepest interest here is to understand my own motivations. I want to be informed by these lenses of history and my life experience.  I want to make choices that serve me and acknowledge my impact across our differences. Ultimately, I want to live more effectively in solidarity across our differences.

I have come to recognize, with profound grief at times, this dichotomy: my desire for relationships with women has supported a money-making system that, while it doesn’t have to, marginalizes people of color, women, and others–both in the past and today. I have had to grapple with my fear of what I might lose if I refuse to participate in these aspects of this system. Access to food and shelter…basic survival needs immediately come into question. Then there’s the comfort of the middle class: an occasional vacation, adequate clothes, and dental care. But beneath that, for me, was always this fear that I would lose my attractiveness and ability to connect to a woman and my raison d’être.

Through these reflections, I’m clearer about my masculine identity. I’m more humbled and empowered. I’m also less interested in “powering over.” No longer do I work to make money out of fear or from a neediness for a woman. I can work as an expression of non-violent solidarity with all of myself, those I’m close to, my community, and my world. Women are, of course, a powerful and amazing force and I want healthy, honest, intimate relationships with women—as a father, a son, a brother, and a partner. But I’m learning that if I’m to deserve this approval, I have to earn my own approval, first and foremost. I have to be “sexy” to me. And this means I want to, I can, and I will step up to the plate of my own inspiration, wholeness, tender compassion, ferocious boundaries, and noble brilliance. I can let these aspects of me unfold, catch fire and generate the money and wealth I need and want with profound gratitude. I allow this knowing that the connection to my conscious privilege has the power to transform the poison of my former unconscious privilege into a balm for me and our world. As this work gets done inside me, I increasingly enjoy envisioning, sharing, and creating just and thriving communities, organizations, and a planet where no one stands alone.